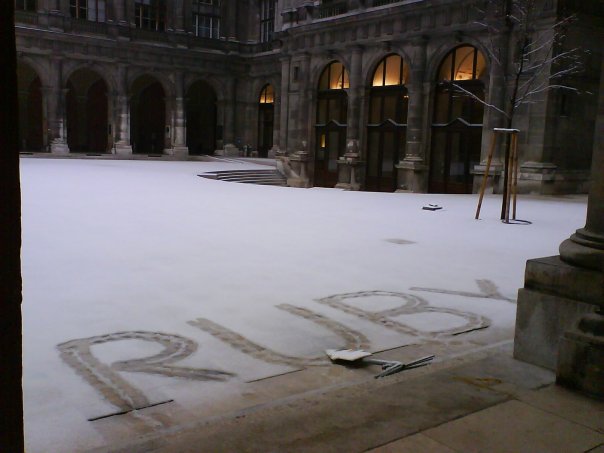 Last weekend (10. to 11. November) we were at the Euruko, the European Ruby Conference in Vienna. The conference wasn’t nearly as big as the Railsconf Europe, but the ad hoc character adapted very well to demands of the attendees and the topics were more academic. Here is a round up of the presentations I attended.

The Keynote was about the future of ruby with a look back to its beginnings by Hal Fulton. About the upcoming ruby 1.9 he said, that it wouldn’t change that much, but will gain performance by having its own virtual machine. Another aspect of his talk was the shift to enterprise use.

The following talk was about the Database Library Dbrb, it is basically a wrapper for ruby dbi to make it easier to work with it. Interesting if you have to do data crunching closer to the relational domain.

David Anderson shows a structured wiki, where you can build simple Applications with forms and so on.

After the lunch break Christian Neukirchen showed Rack, a simple and modular web server interface specification. It basically wraps the status, headers, and body in a array. Following the rack specification you can add middleware between your server and the web framework, e.g. log file generation or URL rewriting.

An alternative to watir, a in browser testing framework, was shown by Kingsley Hendrickse, the Ruby IE Scripting System (RIESS) and AutoGUI.

The powerfull, but hard to learn, web site scraping framework scRUBYt was introduced by Peter Szinek.

The last talk of that day was about the use of Domain Specific Languages and how easy it is to build one, held by Martin Grund.

In the evening we had an excellent dinner in the ‘Universitätsbräu’. My personal dish recommendation ‘Schöpfsteak’.

We took the opportunity and input from the conference to try out some new stuff in a late night coding session, although I had had just 4 hours of sleep the night before. But alex will write some more about our twitter mashup twizzer.

On Sunday we missed the first talks. So i can’t tell you anything about it ;)

The first I joined again was from Tim Becker, who showed DTrace. DTrace is an integrated tracing framework for debugging applications or the OS itself. It is integrated into Solaris and the latest Mac OS 10.5 ‘Leopard’.

What Trees are good for, was explained by Paul Battley. For example they are good for faster best match search using the Levenshtein distance. But I have to admit, I didn’t followed that talk very well.

Then Stephan Kämper talked on Quality in code, and shows some exaple of good and bad code.

Hal Fulton filled the little gap before the lunch break with his proposal for an in operator in Ruby.

After the lunch it got even more academic with Ragel, a state machine compiler, presented by Ry Dahl

Then we showed our results from the coding session.

The last presentation of the Euruko was held by Sasch Schlegel about the ebXML Messaging System called Hefeweizen. I liked the MAMAs and PAPAs analogy ;)

Before we caught our flight home, we had another dinner at the ‘Universitätsbräu’.

I enjoyed the Euruko very much, I will try to attend next year again. Maybe in Prague then.